Helen started her journey in dance back in 1993 training at Swindon Dance’s rich and inspiring foundation course before heading up North to begin three years vocational training at Northern School of Contemporary Dance.

Spanning a career of over 20 years, Helen has danced professionally for DansConnect working for choreographers Jonathan Lunn, Scott Ambler and Yael Flexer, before moving on to Motionhouse where Helen performed Atomic and then worked with Artistic Director Kevin Finnan to devise Fearless, Volatile and Perfect alongside numerous large scale site specific works across the UK over a period of six years.

In 2006 Helen moved to Norway and performed with Panta Rei Danseteater as part of the Cultural Rucksack programme throughout Norway and beyond which included creating work for Royal State Cultural visits to New Delhi and Mumbai alongside developing the MUDA project in Dar Es Salaam, Africa.

and their touring work Driven. Following this Helen continued to perform and joined Mobius to tour Such is Life alongside developing choreographic projects to include Full Force Dance Company in partnership with The Point, Eastleigh, Forbidden at Goodrich Castle alongside Dancefest and A Fools Journey in partnership with FringeMK.

In January 2014 Parlor Dance began to research their new work ‘Home from Home’ looking at care in its various contexts. Each of the three pieces was explored for one week over a three week period working in Milton Keynes, Northampton University, Surrey and Bridport Arts Centre culminating in a performance in Bridport in January 2014. This work is aiming to be fully made and to tour from Autumn 2015.

In 2012 Helen was the Assistant Choreographer for London 2012 Paralympic Opening Ceremony, working again alongside Kevin Finnan and 3000 amazing volunteers.

Following this Helen made and internationally toured her own full length work Close Distance which was supported through Arts Council England.

During this time ideas for MÓTUS were beginning to brew and in 2013 MÓTUS was officially born and supported again through Arts Council England to develop a festival and a unique dance provision in Milton Keynes.

EXCITING ANNOUNCEMENT! MÓTUS are delighted to announce that on the 28 May 2022 – the Hofesh Shechter Company will be coming to Milton Keynes; performing at The Venue MK (Walnut Tree) presenting their new work ‘Contemporary Dance 2.0’. Please visit Hofesh Shechter on MÓTUS to purchase tickets 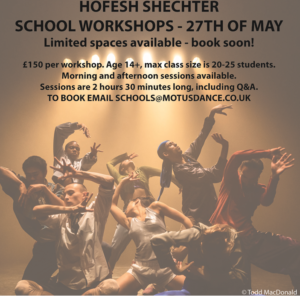